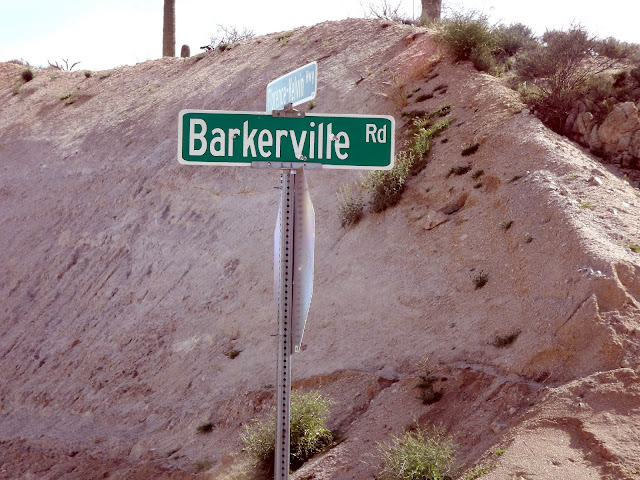 We have been passing this sign for a while now as we drive out Florence-Kelvin Highway.
Yesterday we decided to check it out to see where it goes.
Yeah, I know we could just look on a map and see where it goes but where's the fun in that.
We headed south on Barkerville Rd. It turned out to be a wide graded road with some washboard. 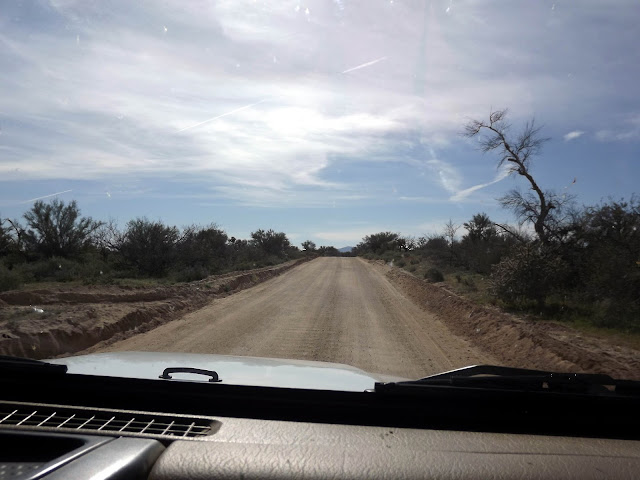 The first thing we noticed was that there were no Saguaro's along the road. There were some very large Yucca's and a lot of Prickly Pear cactus as well as the normal brush and scrubby trees. 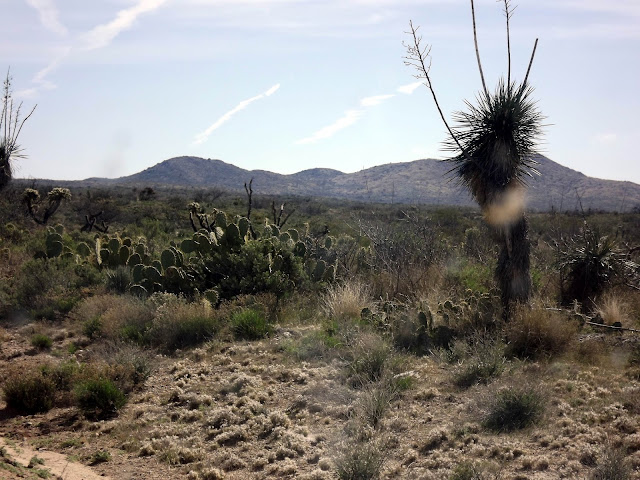 Another thing we found was that there is very little open land. We did find a wide turn off to a road that went onto some State Trust land. 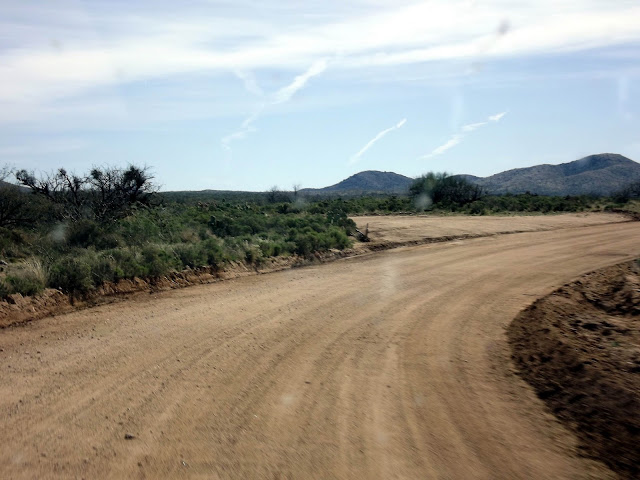 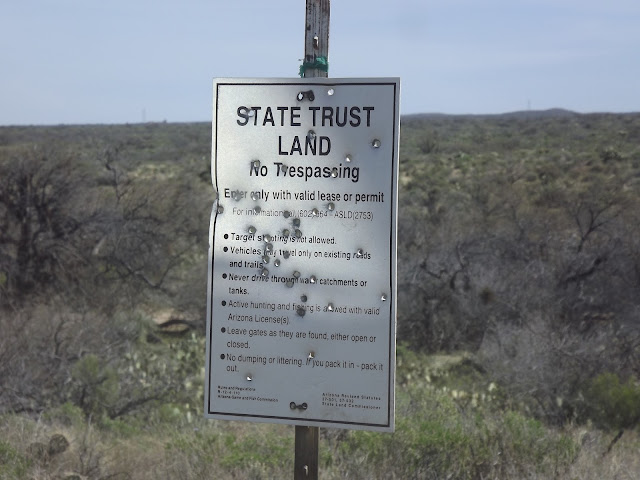 We decided to take a chance and turned onto it and followed it for a while.

The road was what we like a narrow track. Just after we turned onto the road we saw this large hawk sitting in the top of a tree. 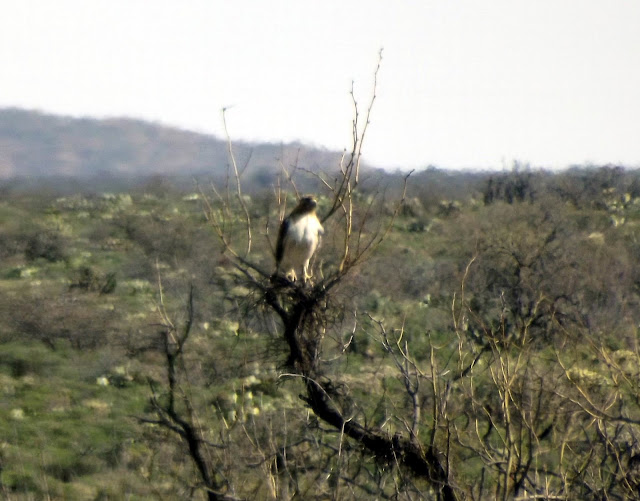 While we were taking pictures the hawk took off. We noticed that there was another hawk flying around (possibly its mate).
Patti got lucky and got a picture of both hawks in flight. 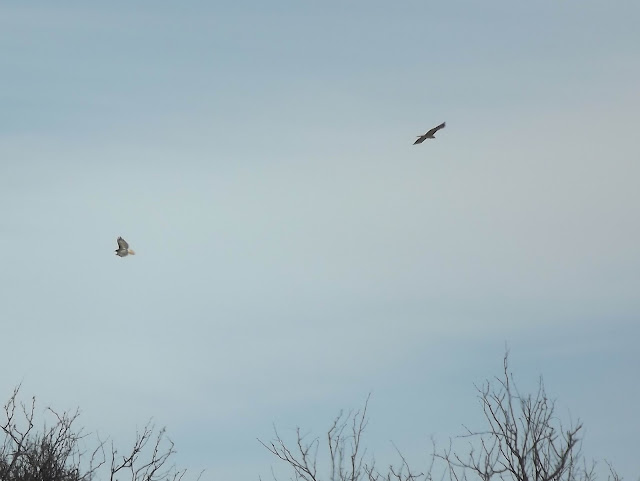 We followed the trail to a large corral. Notice all the prickly pear cactus around. 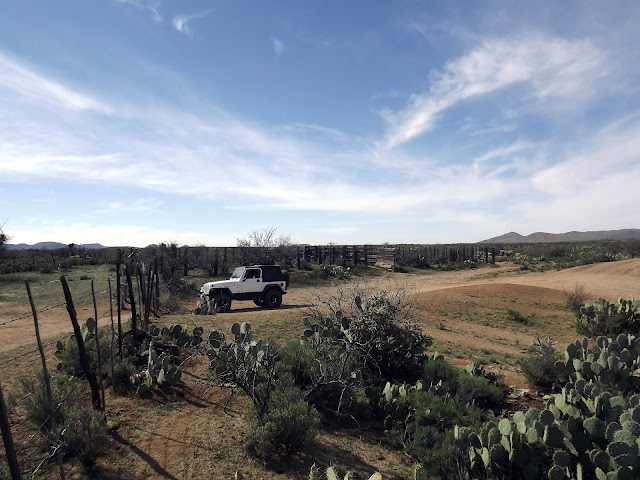 
We passed the corral and went down into a nice looking valley. 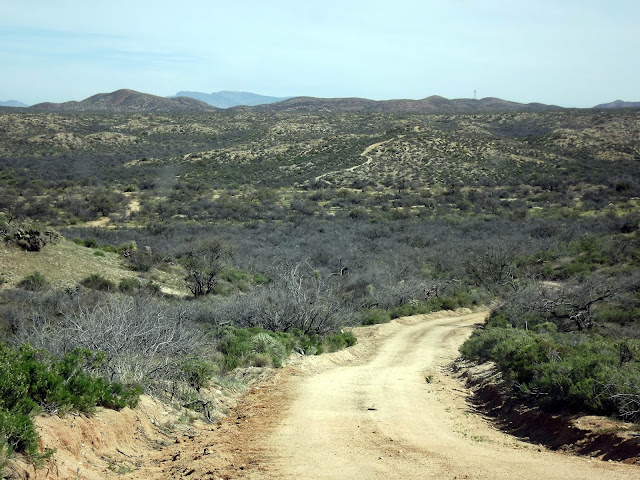 As we dropped into the valley we started seeing Cholla's which we didn't see on the upper flats. 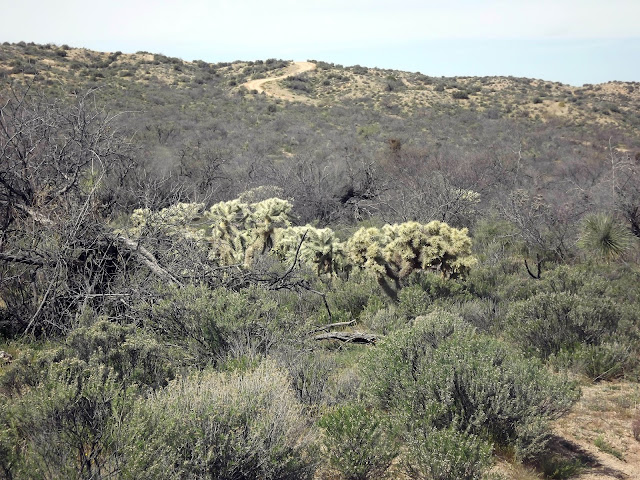 Next to the trail we saw some pretty blue wildflowers. Unfortunately the blue color doesn't show up in this picture 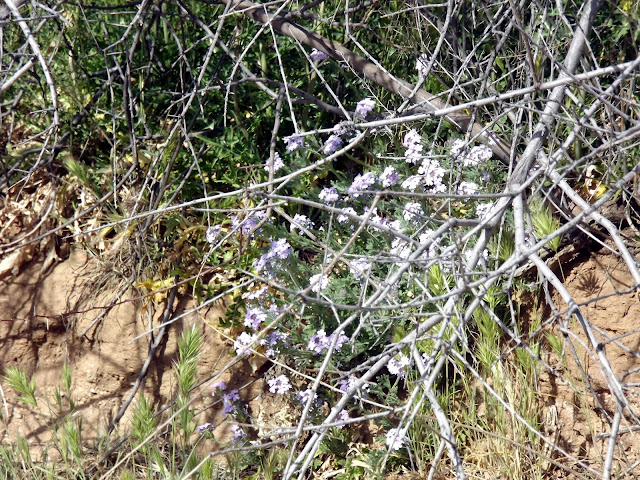 We saw a trail going up the hill out of the valley and followed it. 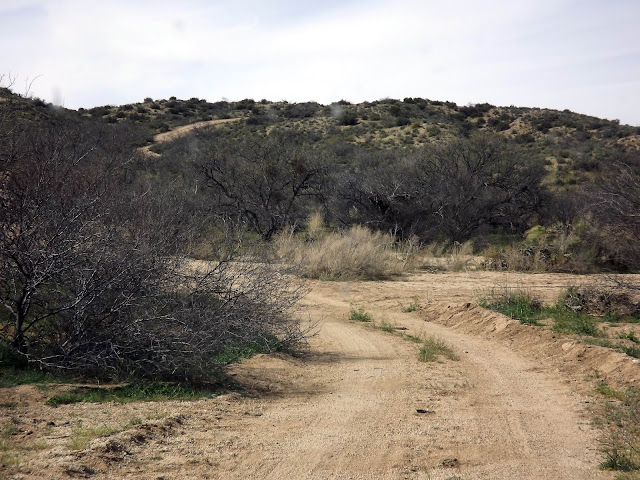 We passed another corral and a tank. There were some nice healthy looking cows in the area. 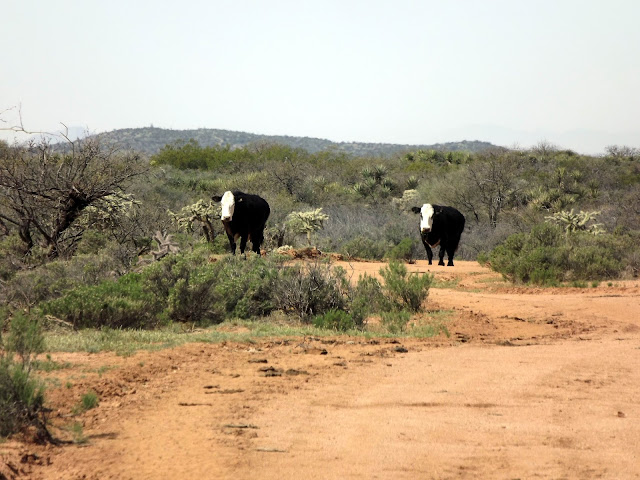 Back on Barkerville Rd.

We got back on Barkerville Road and continued heading south. A few miles down the road we passed a working windmill. 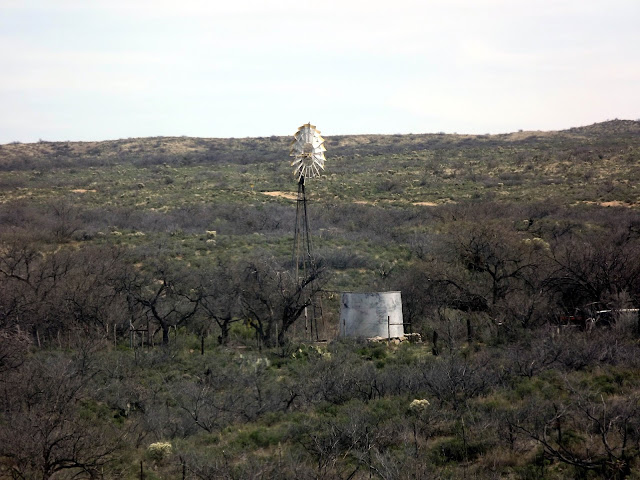 We found another side trail and turned onto it. The trail didn't go far but it did pass an interesting rock outcrop. 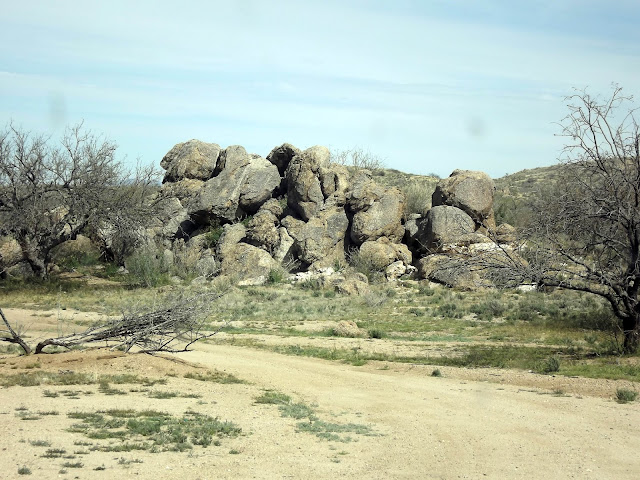 We entered an area of grass covered rolling hills with splashes of little yellow flowers. 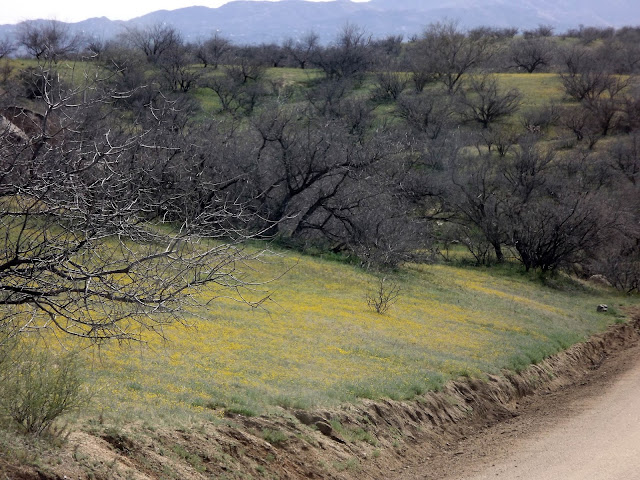 Looking For a Lunch Spot.

We came to a trail going off to the right where we could see a tall tower. We decided to check it out to see if it would be a good place to have lunch.. 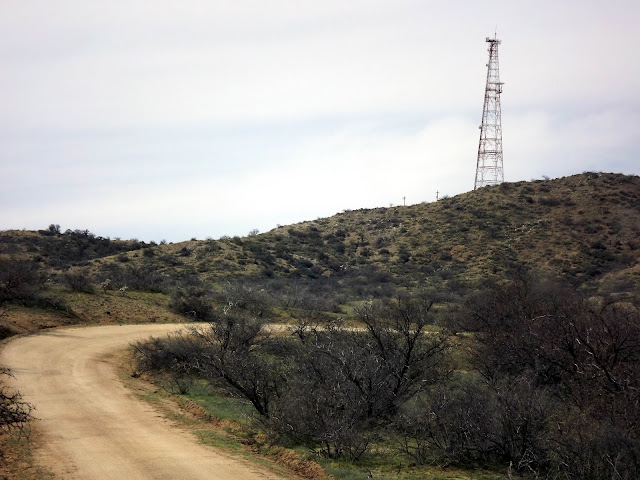 Unfortunately a short way up the trail we came to a locked gate. Here we turned around and went back to the main road.

A little further down the main road we came to an other turn off so we followed it to the top of a small hill where the trail ended. This looked like a good place to have lunch as we had a nice view of Mount Lemon in the distance. 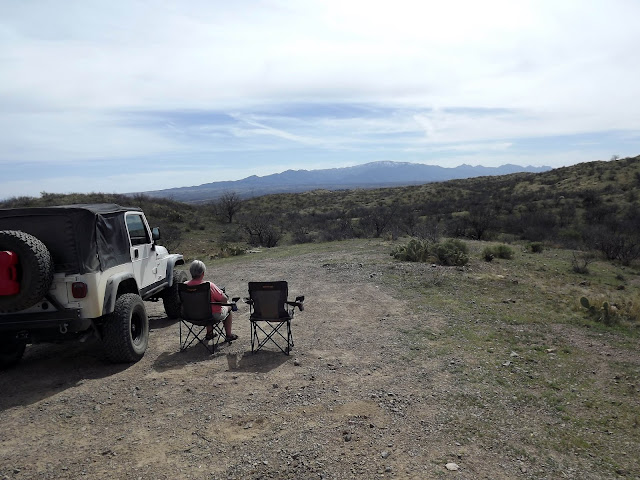 We were surprised to see that there is still a lot of snow on Mount Lemon. 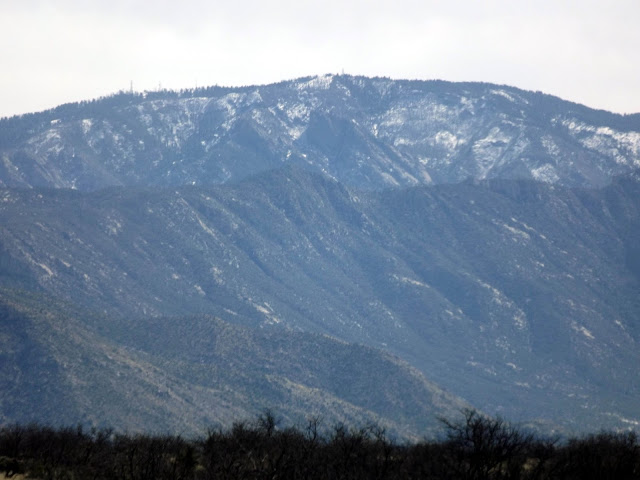 After lunch we continued down Willow Springs Road to Hwy 177 just east of Oracle Junction. At Oracle Junction we turned north on Hwy. 79 toward Florence and home.

This wasn't a particularly exciting ride but we had fun just seeing new country.