The Computer is Fixed

A few days ago I went over to Bob’s to see if he could help me get the Acer working. We messed around with both computers for several hours. Around  5:00 we decided to leave the computers with Bob so he could work on them that night.

I got a call from Bob the next day saying that the Acer was working again but the Dell was still messed up.

On Sunday I went back to Bob’s to get the Acer. He is keeping the Dell so he can mess with it some more.

Getting the RV Ready

We got the RV out of storage and are getting things ready to head south for the winter. We have been slowly putting stuff in the RV. 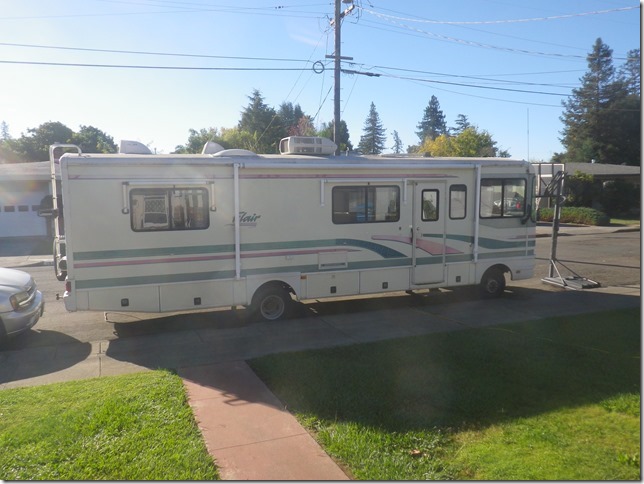 I have been fixing a few things but I didn’t take any pictures of what I did. At least I can post pictures now.
Today I am going to wash the RV and put some more stuff in.

The drivers side (front lower control arm mount) is broken. I am taking the jeep to 4Wheel Parts to get the mount replaced on Thursday and should get it back the same day. Our plan is to leave SRO on Saturday morning and arrive in Quartzsite on the 8th of November.

Okay, that’s it for now.

It has been a while so I thought I would bring you up to date on what I have been doing.
I still am procrastinating about getting another computer and haven't decided yet so there still aren't any pictures.

We are getting things ready to head south for the winter. We will get the RV out of storage on Tuesday.
I was under the jeep to grease it and noticed that the drivers side lower control arm mount was broken. Fortunately only one side was broken so I can still drive it to the repair shop.
I decided that I didn't want to fix it myself . I just don't trust my welds on something that important.
I went to 4 Wheel Parts to see if they could fix the jeep for me. They said that they can fix it but not until the first of November. It is only a four hour job so they can have it done the same day.
It would have taken me days to fix it myself.

I went ahead and greased the jeep and changed the oil. I also checked the condition of the rear breaks and found them to be in good shape.
I also reinforced the front bumper and remounted the winch.
Other than the control arm mount problem the jeep is ready to go.

I drove the van up to the cabin on Thursday and it ran okay. It still has the high RPM miss but it is running better than it was when I took it apart. I guess the new exhaust manifold did help some. At least now it doesn't back fire. I'll work on it some more next summer.

Okay, that's all I have for now. Talk to you later.


A few days ago I got the van back together. The new manifold fit's perfectly so I was able to tighten it down properly.
I drove the van up to the VA on Tuesday, a ride of about 10 miles on the freeway and it seemed to run okay.
Until I take it on a longer trip, I won't say it is fixed.
I will have to go to the cabin soon, to bring some things home so I'll give it a good test then.

Working on the Jeep


In the mean time I am working on the front bumper and winch mount of the jeep, getting it ready to tow to Quartzsite. The winch mount is a "universal" mount and has a bunch of holes in it but none of them line up with the mounting points on the frame. I am also trying to make the bumper mounting stronger. This could take a while.

Still no pictures.
Posted by Marty at 8:10 PM No comments:

Computer Crash and a Trip to the Coast

As you know, I have been having trouble with my computers. My old Acer won't save or publish posts when written with Live Writer and won't save pictures.
I have been trying to get my newer Dell to work but The USB ports and the touch screen don't work.
I completely wiped the system and reload a new system back to how it came from the factory. It still doesn't work..
I am attempting to write this post with Blogger. It is a slower and a bit clunkier than Live Writer but if it works I will be in business again.

On Friday, Patti's Sister Kathi and her husband Bob came down from Oregon for a visit.
Yesterday we drove to the coast. On the way we stopped and visited with Bob N. and his chickens.

After leaving Bob's we drove to west on highway 116 the coast then headed south on rout 1.
When we got to Bodega Bay we drove around the north side of the bay to Bodega Head, a point of land the sticks out into the Pacific Ocien. Nothing but water between here and Japan.
After a short stop at the head we headed back to the bay where we stopped at the Spud point Crab company. We had planned to have supper but the Crab co. was closed.
Right next door to the crab company is another sea food place. we decided to try it out.
While we were checking out the menu the lady at the counter announced that they were pout of propane and would not be able to cook any thing.
We left there and drove to Lucas Warf, which is on the south end of Bodega Bay.
There is a small seafood snack bar there called The Fishetarian. Our grandson Harvey works there during the week but wasn't there on Saturday. We ordered fish and chips and Prawns and chips. It was a bit over cooked but it was pretty good.
After eating we headed for home.

Okay, that's all I have for now.

Birthday Weekend at the Cabin.

We got to the cabin around 11:20. Joanne and Dave were already there. They had arrived around 10:45.

We spent the first part of the day getting moved in. After that we just shade hopped and visited. We had lunch around 1:00.

After lunch we played a game of Jokers Rummy and visited. Patti won the first game.
After one game we took a break. Around 5:30 we fixed supper. After supper we played another game of cards; Joanne won that one.

Around 9:15, Joanne and Dave went to their lodge. We listened to some old radio programs for a while and went to sleep.

The morning started off gray and overcast. We knew that it was going to rain some time today.

After breakfast Patti and I moved some firewood, stacking most of it on the porch.
After that, I sharpened the chainsaw.
Once that was done, I caulked some spaces I found in the cabin walls. I’m constantly finding new cracks as the wood expands and contracts with the weather.

Around 12:00, the rain started. It was light at first but became heavier as time went on.

We spent a lot of time indoors. Patti, Dave and I played a game of Rummy. Patti won.

The rain slowed in the late afternoon and by evening it had stopped.

After supper we gathered around the table in the cabin and played two more games of Jokers Rummy.
Dave won one game and I won the other. We are now even. Each of us have won one game.

Around 10:00 Joanne and Dave went to their lodge and we went to bed.

The rain started again some time in the early morning.

Around 10:00 we headed up the Bear Spring Road to do some work on the trail. 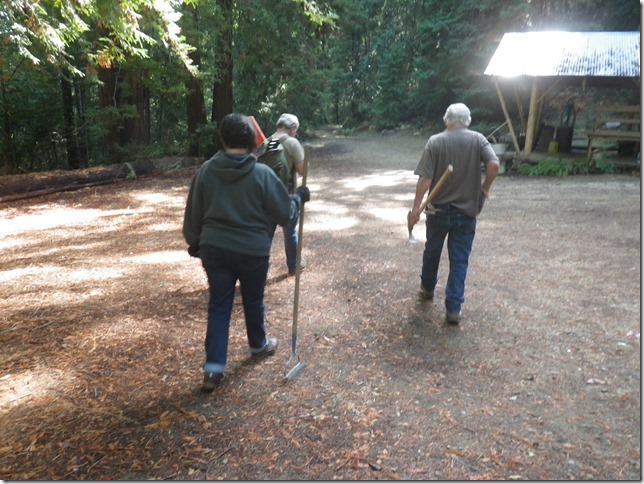 Everyone carried a tool; Dave had the Chain Saw, Joanne had the Rake, Patti carried a pair of loppers and I had the Pulaski. 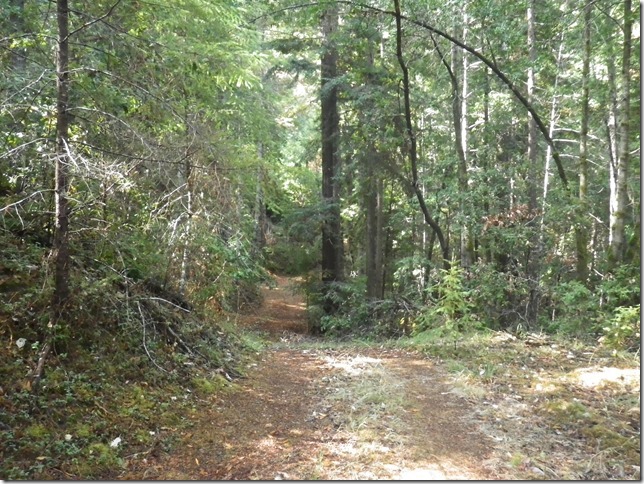 We stopped at the first bench on the trail for a break. After sitting around on the bench for a few minutes. We continued out the trail cleaning up fallen trees and other trip hazards.

Here I am removing a root from the middle of the trail. 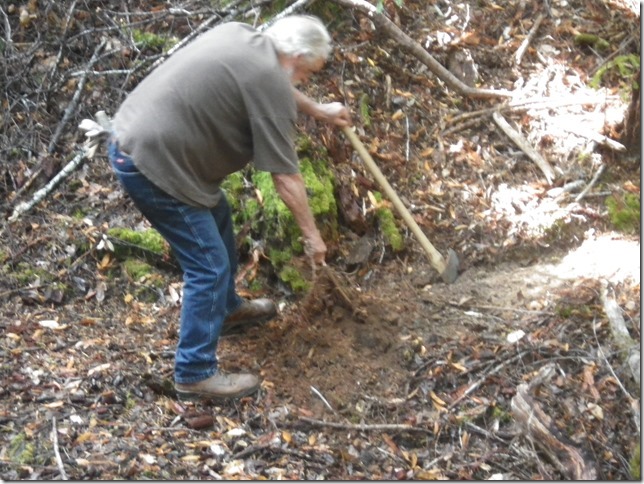 Here are the ladies taking selfies. 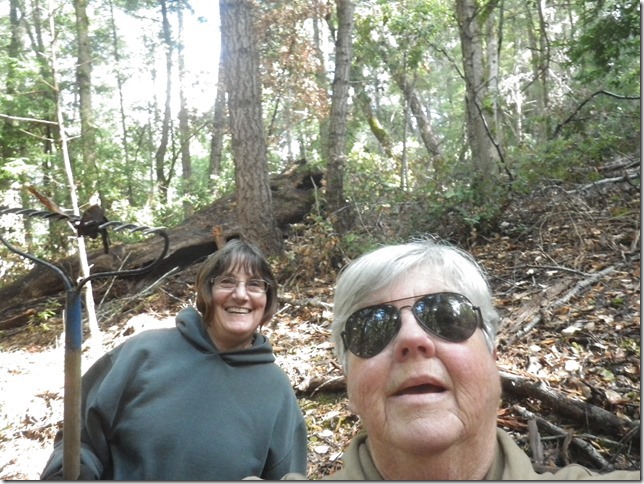 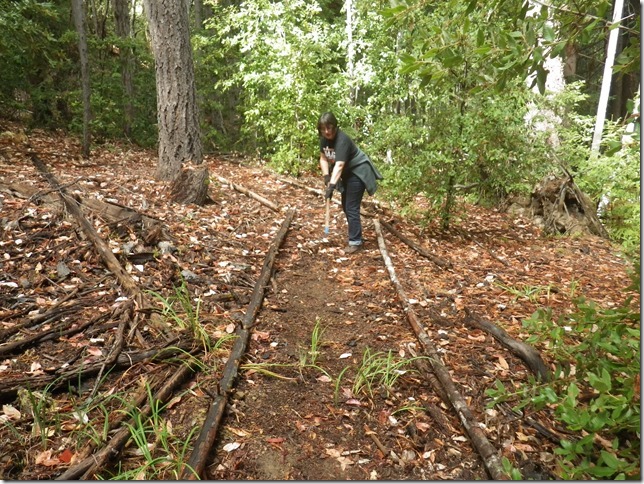 Dave and I clearing downed trees from the trail. 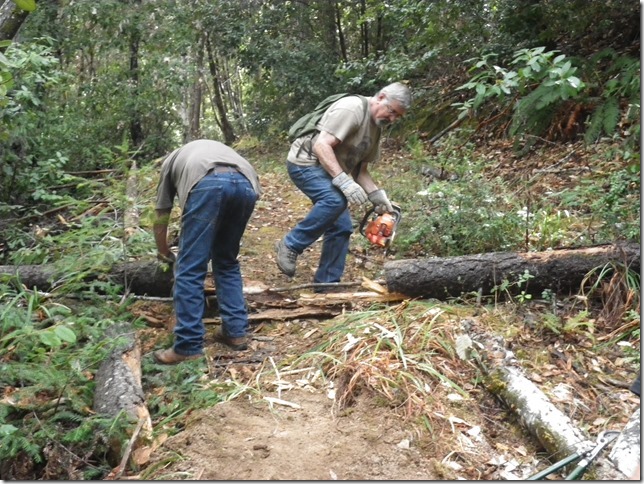 Patti got a picture of our state Mollusk, a Banana Slug. They are pretty fast so you have to be on your toes to photograph one. 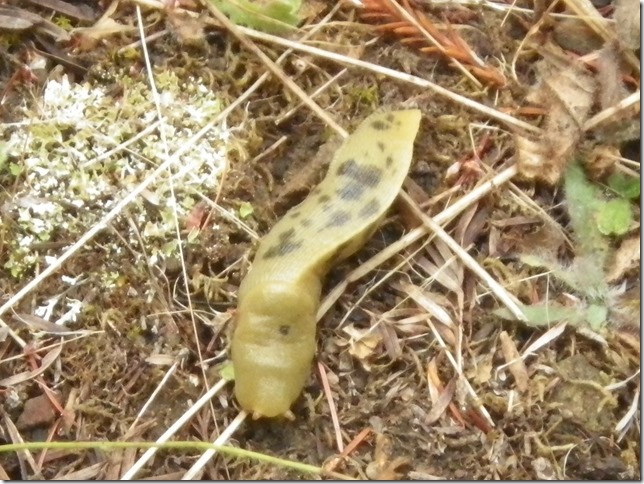 Patti did more than just take pictures, she also was lopping off  branches that were in the way but no one got her picture doing it.

We got back to the cabin around 1:30 and had a light lunch.

Dinner, a Celebration and Cards.

After lunch we all went about our own affairs. Around 5:30 I cooked some Lamb T bones, Asparagus and sliced heirloom tomatoes for supper.

After supper, Joanne and Dave came up and we had Pie and Cupcakes for my Birthday celebration. 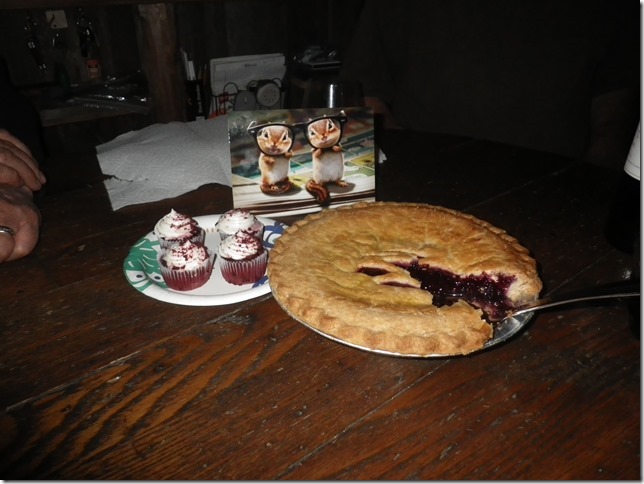 After the pie and cup cakes, we played two games of Jokers Rummy. I won the first game and Patti won the last one.

Okay, that was how I spent my birthday. It was just right!

Spent the day just puttering around the place.

Around noon Joanne and Dave headed for home.
Patti and I hung out in the cabin.
I tried to fix the front door as it is sagging a little and dragging on the bottom. My fix didn’t work so I’ll have to think of something else.

In the evening, Patti and I played a couple games of rummy. She won.

We got up around 8:00 and started packing stuff up.

It was a great weekend. It was good to experience the rains finally starting. I hope they keep it up for the rest of the year. Of course I know that wont happen.