On Friday Bruce, Dennis, Dave and I took a ride into the Plomosa mountains.
We had intended to check out what we call “the Double-decker Mine”.
We drove out SunKist Road to the trail that goes over Preacher Pass. We turned right and followed that trail and stopped at the knoll near where the trail splits.

Bruce and Dave in front of Dennis’s jeep on the knoll. 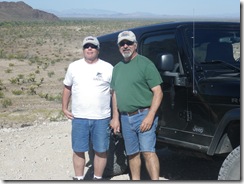 The right fork goes over Preacher Pass and the left fork goes past the Climax Mine. We took the left fork and stopped to check out the shafts at the Climax Mine.
We continued over a rocky pass and stopped to check out a rock structure and then headed for the main trail in search of the Double-Decker mine. After taking several wrong trails that ended as Cul-de-sac’s 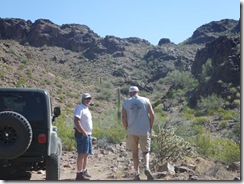 we checked out a couple of shafts near the D,D mine. 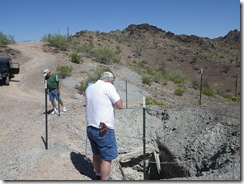 Finally we got to the one that goes to the mine. Unfortunately the trail had a real bad wash out at the bottom.
We took another trail that goes up to a hilltop across the canyon from the mine. It was noon and very warm but there was a nice breeze blowing across the hill top so we decided to have lunch there. 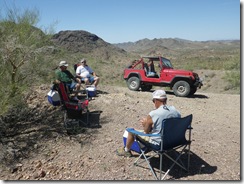 We could see the entrance to the mine and noticed that it was fenced off.
After lunch we decided to continue to travel on and check out more of the Plomosa mountains.
We headed west on the main trail until we came to Plomosa Road where we turned right and drove up the road to the trail that goes over Quinn Pass. We went over the pass and followed several trails until we came to the south side of the Four Peaks. There we stopped to check out what we call The Big Hole. This is a vertical shaft that is very deep and has a crumbling rim at the top. 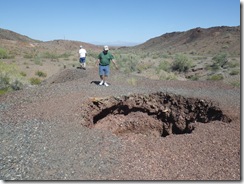 There are so many shafts in the area that are covered over or fenced off but the Hole is much more dangerous than any of the others, but it is wide open and not even fenced. Go figure.

From the hole we headed for home. We went west to the trail that goes through the the sand dunes and stopped at Patton's old air field where during WWII woman pilots ferried bombers down here. 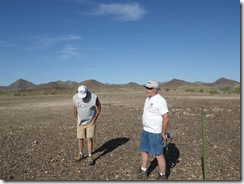 Patti, Joanne, Connie and Becky went to Lake Havasu City to do some shopping. They went to Hobby Lobby. Then they went to lunch at a brewery on the west end of the London Bridge. From there they went to Sally’s beauty supply store, then on to Walmart.

Okay, tomorrow I will tell you about the Nopali feed we had on Saturday.