Labor Day Week at the Cabin.

After breakfast with Donna and Susan we went to Donna’s to see her rocks.  She has hundreds of rocks displayed in her yard.
I eventually got on the road.

I arrived at the cabin around 12:30.
Everything looked good. Apparently no one had been here since we left last week.

Once I got moved in, I found that I had forgotten to bring the Marion Berry Pie that we bought.

I’ll have to call Patti and let her know. I am sure that she knows but I should call her any way.
I’ll do that this evening.

After a couple hours I decided to walk up the road to the spring tanks to check out the water supply. About halfway up the road was a tall skinny fir tree that had fallen across the road. I’ll have to take care of that tomorrow.

When I got to the spring tanks, I found that the inflow was really low. I checked the strainer and it seemed to be clear. The flow is a little slower than the cabin spring.

After checking the spring tanks I decided to continue the walk and take the trail back to the cabin.

I goofed off the rest of the day.

The refrigerator was not working properly. The freezer was working but the fridge part wasn’t working. I knew what the problem was. I pulled the back off the fridge and cleaned the rust off the burner.
There is a baffle in a tube that the heat goes up. Due to the heat and moisture the baffle is rusting away. I will have to see if I can get a new baffle to replace the rusting one.

Removing the Tree From the Spring Road.

I took a short break after fixing the fridge. Then I put the chain saw and related stuff in the jeep and drove up to where the tree is across the road. 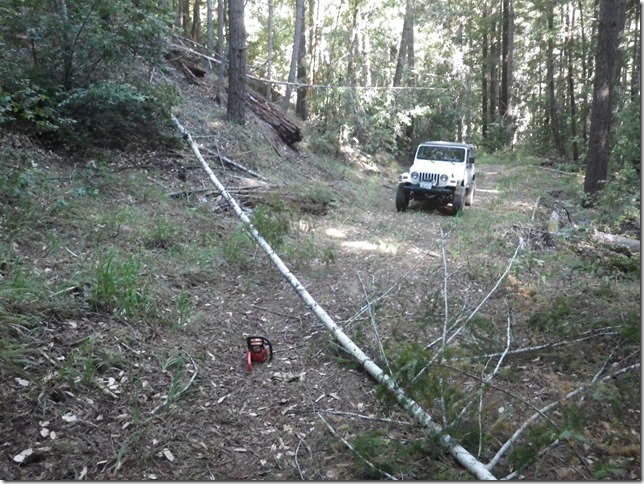 I ended up just cutting the tree enough to get it off the road. 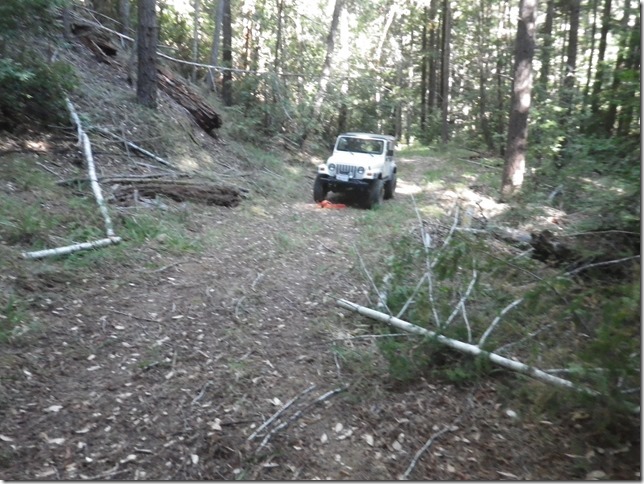 Dave showed up around 11:00. He said that he would have been earlier but there was a wreck on 128. A big rig went off highway on one of the turns. All Dave could see of the truck was the rear wheels of the trailer up in the air.
Dave and I visited for a while.
Eventually Dave went to move into their lodge and get things set up in.

It was getting warm enough to open the windows so that is what I did.
There were a lot of cob webs around the windows so I got the broom and swept all the cob webs from the windows and went through the cabin sweeping down what cobwebs I could find in the rafters and in corners and crannies. You can never  find all the webs but it is much better than it was.

In the evening Dave and I visited until bed time.

A Visit to the Lumber Plie.

After breakfast Dave needed some lumber for a project.
He looked  through the lumber that was on hand around the camp but couldn’t find anything that would work.

Eventually I mentioned that he might get what he needed from the lumber pile at the slag heap.

We drove up to the slag heap and dug through the lumber pile. Eventually we found exactly what Dave needed for his project.

We loaded the boards on Dave’s pickup and went back to camp.

Patti and Joanne arrived around noon. We visited for a while and broke up for lunch.
After lunch we shade hopped around the area until supper time.

Had a rough night; refluxed a lot and lots of body pain.
Slept in until 9:00.

We did very little today mostly shade hopped and visited.

Around 4:00 we decided to play some cards.The first game was over around 6:00. 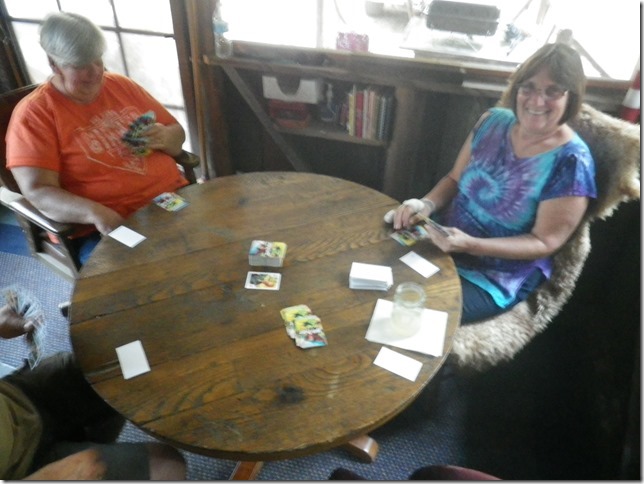 We cooked and ate supper.
Around 7:30 we started another card game and finished around 9:30.

Joanne had surgery on her hand last week so Dave made her a card holder. She used it a little but decided that it was to big and in the way and she could hold her cards just fine. 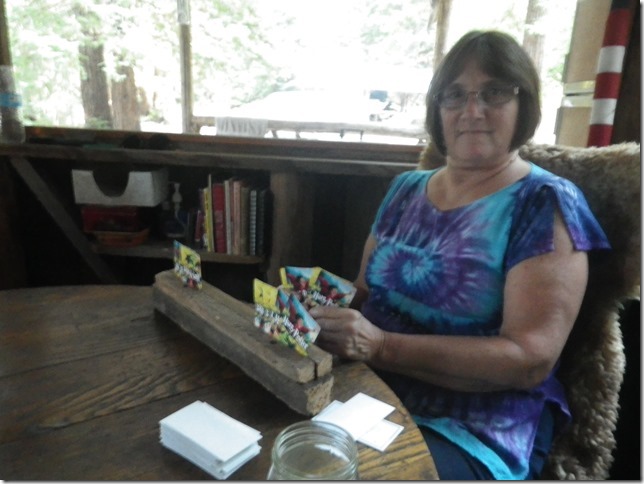 Okay, that was our Sunday.

I decided to do a little work on the Trail as I haven’t done much Trail work this week.
About 9:00 I took the Pulaski and a rake up the trail from the cabin. When I got to the first switch back I started chopping out the trail. I spent about an hour at it; by then I was spent.

Here is what I got done. 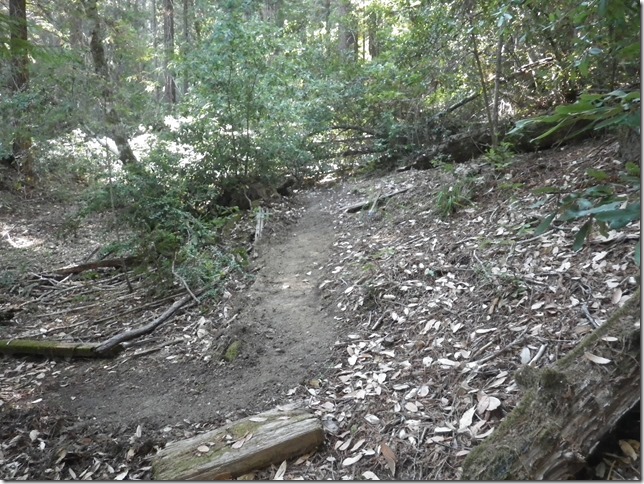 It doesn’t look like much but the ground is pretty hard.

When I got back to the cabin Joanne and Dave  were sitting in the shade so Patti and I joined them. We did a little shade hopping until lunch time. We went to our separate camps for lunch. After lunch Joanne and Dave left for home.

The Rest of the Day.

I was tired from my labors this morning so I took a nap for a couple hours.
I made Taco Salad for Supper.
Later, Patti and I played a game of rummy.
We went to bed by 10:00

That was our Labor Day.

It is that time again. Time to go home.
We slept in this morning until about 9:30. It was chili in the cabin this morning and was nice and warm under the covers.
I got up and headed for the washroom for my morning ritual and a shower.

Patti was up, taking apart her bed and packing to go home.
I did the same. Once all my bedding was stored in the bedding bag I stopped to cook my breakfast. After breakfast, I wrote this post.

Okay, That was our Labor Day week at the cabin. It was great!!